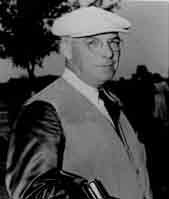 Clyde Mitchell grew up with an appreciation of the outdoors by helping dad Charles run a north woods hunting camp. (Charles was on the last U. S. flyer team to shoot in Cuba for the World Championships.) Representing Remington Arms Clyde began his career in Wisconsin where he won his first industry award in 1918, made a clean sweep of all industry championships at the 1921 state shoot, and headed the singles and All-Around in 1922. He is enshrined in the Wisconsin State Hall of Fame.

Mitchell started making his mark at the Grand American in 1928 where he broke 186x200 to earn his first of four industry doubles titles. He snared the others in 1937 with 98, four birds above his nearest competition and tying amateur champ Ned Lilly; in 1941 for 92 plus shootoff; and 1942 for 94 which matched amateur Rudy Etchen’s score.

Mitchell had a four-bird lead with 590x600 on the 16 yard targets during the 1929 Grand, and he won a tie breaker for the 1931 industry Grand American Handicap award with a 95. In 1931 he also captured the Open Championship with 199 and a shootoff over Joe Hiestand.

He was a member of Sports Afield’s All-American industry teams in 1941, 1942, and 1951 (based on 1950 performance). He was also named to the American Trapshooting Association (forerunner of the Amateur Trapshooting Assn.) team in 1921 comprised of the top ten industry and ten amateur shooters based solely on singles averages.

Clyde’s sons Robert and Jack also inherited interest in the out of doors. Robert (Bob) went along the lines of fly fishing, while Jack served a long career as director of advertising and sales promotion with Remington followed by a thirteen year stint as columnist for The American Hunter before his death.

Mitchell worked for Remington Arms for 39 years as a field representative and later in management, a job which took him from Wisconsin to Minnesota to Georgia and Connecticut. His last years with the company were in Illinois where he was district manager in the Chicago area until his retirement in 1950. He continued to attend the Grand American after his retirement.