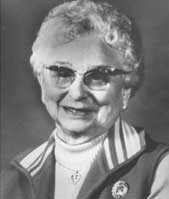 Mary Meadows of Grimes, Iowa, is the only person to have twice won the women’s titles in both the Grand American and the Preliminary Handicaps in the same year. In 1936 she became the second woman to win them once, then in 1939 she captured both trophies again to set the record.

Mrs. Meadows did not annex the feminine Preliminary Handicap honors again, but she did pace women in the GAH three more times—1946, 1947 and 1958. In 1935 she and husband Roy placed second in the Husband-Wife race, and they won it the next year.

Her 1936 score in the Preliminary Handicap plus 24 in shootoff earned her the third spot among the men in that race, (One of the ones she defeated in shootoff was Joe Hiestand, who finished fifth.)

In 1947 Mrs. Meadows placed second in the Women’s Champion of Champions contest with 99, and in 1955 she was third. During the 1970 Grand American, she became the fourth woman to register 100,000 singles targets.

Mrs. Meadows was one of the first women to be active in the operation of the ATA, serving as Iowa’s delegate from 1956 to 1961 and as alternate from 1969 to the present time.