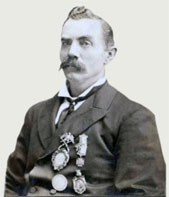 It was the same year that the choke-bore shotgun was invented that Capt. A. H. Bogardus took up trapshooting. Capt. Bogardus, a native of Albany County, N.Y. who moved to Illinois when he was a boy and later to Elkhart, had never seen a pigeon trap before he first took up the sport in 1868. But he came to the traps with 18 years’ experience in field shooting.

Capt. Bogardus’ first public shooting was in a series of sweepstakes at Sr. Louis, Mo., in which he met with fair success. After winning the state championship of Illinois that year, he engaged in a peculiar match which called for him to shoot from 21 yards from a buggy, with the horse on the trot when the trap was pulled. He beat his opponent who was standing on the ground, flat-footed, at 25 yards. He later shot two similar matches, winning one and losing the other.

Capt. Bogardus’ flair for the unusual in shooting also pitted him against the time element in several matches. Among his earliest such performances was one in 1869 in which he was to kill 500 pigeons in 645 minutes for $1,000. Doing his own loading, he accomplished the feat in 528 minutes. Later he broke 501 clay birds in 34 minutes, 7 seconds. And at one time, it took him two trials of an allotted three to win a $1,000-to-$100 wager in which he had to score 100 straight hits. On the first try his gun had broken.

Another of Capt. Bogardus’ great feats was his performance of shooting at 5,000 glass balls in eight hours and 20 minutes, breaking 4,844 of them. He accomplished the feat at Madison Square  Garden in New York City, using two guns and enlisting the aid of a man to cool off his guns in a bucket of ice water. The purpose of the exhibition was to advertise a tin-coated shot. A stipulation of the shoot was that the barrels of the guns were not to be cleaned, to show that the shot would nor lead the barrels.

Soon after the invention of the Ligowsky clay pigeon in 1880, Bogardus joined Doc Carver in a tour of the country for the purpose of introducing the new target to trapshooters. A series of 25 matches of 100 targets from 18 yards was shot, with Bogardus winning just three and tieing in three others. This was his greatest defeat, since he consistently won when matched against other trapshooters of the day. For instance, pitted against four of the greatest of the time, Bogardus broke 178 while the other four totaled 176. And in one meet Bogardus was to break 500 targets before his opponent could break 450. The Captain reached the 500-mark in 35 minutes and 4 seconds while the other competitor had broken just 361.