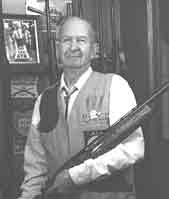 McKinley managed the ATA from October 1964 through October 1974, a crucial time of growth and modernization---taking the association’s record keeping from a hand operation to automation; overseeing the realization of a Trapshooting Hall of Fame facility; erecting permanent structures for industry exhibitors; streamlining office operations by introducing a plastic membership card, redesigning shoot report forms and procedures, and helping negotiate with the City of Dayton for a long-term lease.

During his tenure the traps in Vandalia were equipped with interrupters, and the ATA for the first time both purchased traps of its own and procured targets on a bid basis.

"Bud" was also a proficient shooter. In 1955 he earned the Grand American Doubles crown with a lone 97 in a field of 409 entries. That same year he was part of the Ohio fivesome that won the State team race. In 1951 he captured a class prize in the Dayton Homecoming and tied with 198s for two class awards during Championship week.

A yearly participant at the Golden West Grand in Reno, he was also a frequent competitor during the heyday of the New York Athletic Club’s North American Championships. In 1952 he won the doubles with a 95, and in 1964 broke 195 to capture the singles by three targets.. He had that same margin in leading the doubles again with his 98, second only to Walter Beaver’s 99 entered in 1938. He also won the 1964 all-around with 371x400.

With his wife Bess he won two husband-wife awards during the Ohio state shoots, and in 1981, 1983, and 1985 he won the Ohio veteran doubles trophies.

A former school teacher and farmer, Hugh was inducted into the Ohio Trapshooting Hall of Fame in 1992. At the close of the 1994 registered shooting season he had recorded 107,075 singles, 60,750 handicap and 28,224 doubles targets.