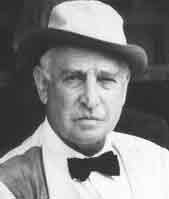 George S. McCarty was the right man at the right time in the right place; he was a man of action and determination. And that’s what it took in 1923 and 1924 when the amateurs took control of trapshooting and decided to build the permanent home for their sport.

Before becoming the second president of the ATA, McCarty had an accidental meeting with Dayton, 0HIO physician Dr. William A. Ewing at the 1923 Grand American at Chicago. McCarty was trying to get a taxi into the city when a gentleman sitting next to him offered to share his cab when it came. The man was Dr. Ewing, who told McCarty about his problems shooting over the Chicago traps, which had a background of water. When asked if he had any solution to the problem of finding a suitable site for the Grand each year, Dr. Ewing told McCarty if he would meet him the next morning, he might have more to report. The next morning Dr. Ewing presented George McCarty with a telegram from F. B. Patterson of Dayton, president of the National Cash Register Co., reading: "Go as far as you like. I’ll stand behind you." Ensuing meetings led to the birth of the permanent home.

So rapid was the progress of the construction that the grounds had enough traps to host a big Central Ohio League tournament in July of 1924. The ATA president ‘christened" the yet uncompleted grounds by shooting at—and breaking—the first target thrown; a shot heard around the world."

McCarty began shooting targets in 1904 and soon became one of the top shots in the country, averaging around 95 percent. He won the New York AC amateur championship in 1908 with 95x100, in 1909 with 98, in 1921 with 198x200 and in 1922 with 195. He was largely instrumental in the adoption of the 25-yard mark in handicapping in the 1920s, fighting hard over objections of shooters who said no one could break a good score from back there. At a major shoot in Pinehurst, N.C., McCarty broke 95 from 25 yards, proving it could be done. In another big Pinehurst tournament, he led the field with 588x600.

McCarty retired from active shooting in 1926 to devote his rime to bettering a method of raising quail, which had been showing signs of becoming extinct. It took him eight years and $20,000 of his own money, but he perfected a system of raising the birds at his farm in Newfield, N.J. The system was published in a booklet printed by the Western Cartridge Co. and taught to boys throughout the farm states.

It was George McCarty who introduced a classification system that came to be universally used. He introduced his system, comprising five classes, at a big Philadelphia Trapshooters League shoot.

Born on Dec. 9, 1868, McCarty died on Mar. 18, 1945 in Philadelphia, Pa. at the age of 77. His obituary stated he was "the man whose tireless energy and indomitable will built the permanent home of the Amateur Trapshooting Association at Vandalia, 0." Comments from those who had worked with him included these: ‘His enthusiasm was boundless and unquenchable." "Few of the shooters knew the obstacles he had to overcome, but the obstacles only spurred his determination, and the Home is there as a lasting monument to show his efforts."