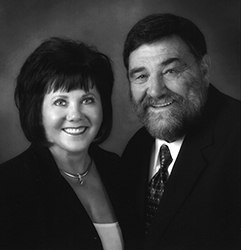 State: UT
Bill and LeeAnn Martin of Vernal, Utah, registered their first targets in 1996, joining Bill’s brother Pete and business partner Craig Hart on the firing line. While they have both enjoyed success in the sport, they are best known for the contributions they have made to trapshooting, both on the all-ATA and local level. This began at their home club, Vernal R&GC. Along with Pete and Craig and their wives Lori and Sharon, they helped rebuild and expand the club, extending the trapline to 13 fields and constructing a new building on the grounds. During the Uintah Basin and Western Grand, Bill and LeeAnn host fun shoots, giving shooters an opportunity to win large cash prizes. They also bring in big-name entertainment and provide added money.

The Martins have done much to help many other ATA clubs. However, they are not ones to talk about their generosity. There have been so many clubs where they have shot and had fun, and they wanted to give back to them and help the sport grow.

One such club is the Tucson (Ariz.) T&SC. Their involvement began when they donated money for new automatic traps. Their support grew and included funding for construction of the west-end trapline expansion, including trap and skeet houses, machines, ramadas, fencing and sidewalks; an outdoor PA sound system; a board room and adjoining restroom; new housing for club management; sewer, water and electrical upgrades to the RV line; a warehouse and laundry facility; International trap bunkers, including the machines; and drainage and gravel work to reduce flooding problems on the grounds.

During the 2010 Grand American, the Martins sponsored the first $100,000 Challenge, where winners of the tournament’s handicap events earned the opportunity to shoot for a $100,000 cash prize. They continued that for two years and included a women’s $50,000 shootoff the final year. In 2011 and 2012 they sponsored the $200,000 LeeAnn Martin Lewis Challenge, where all shooters had the chance to bring home large cash payouts.

Recently Bill and LeeAnn have put their focus more on a local level, helping the ATA from the grass roots by assisting individual clubs. They recently provided $30,000 to the Alberta Trapshooting Association for promotion of trapshooting in the province.

Since selling their oil and gas business seven years ago, the Martins have devoted more time to shooting. While they like to be competitive, both Bill and LeeAnn made it clear that that’s not what the sport is about for them. They participate for the fun, laughter and the people, enjoying the activities that go along with a shoot.

Even so, they have both had success in the sport. The accomplishment of which Bill is most proud is completing his ATA Grand Slam, which he did in 2005. He also has earned three Utah state titles—the 1997 singles, 2000 doubles and 2013 veteran—in addition to a Grand singles trophy from 2007. LeeAnn was a first-time Lady I All-American this year. Her trophies during the 2013 season included category singles and HOA titles at the Western Grand.