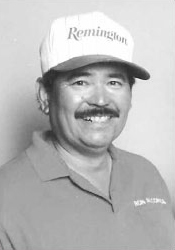 While in the Army, Ron Alcoriza shot a little on the base, and after his service was complete, he began shooting as an extension of his love for hunting, the outdoors and ﬁrearms. He got his start in the clay-target sports with skeet, running 100 in his very first competition. However, after ﬁnding that he could shoot 300 targets in a day in trap. He fell in love with it.

Having attended his ﬁrst Grand in 1985 and placing second in the Champion of Champions, Alcoriza won the event in I989. In 1990 he was runnerup in the Clay Target Championship after 200 and 19 overtime rounds, a record at the time. Four years later he landed the championship with 375 extras. He also placed second in the 1987 All-Around.

Ron captured the 1990 Spring Grand singles and doubles titles, and in Western Grand competition he topped the 1998 doubles, 2001 all-around and 2005 singles.

He considers the highlights of his shooting career to include winning the Clay Target and Champion of Champions titles but says coaching youth shooters at Stockton is the high point of his shooting now. He spends much of his time on the line passing his knowledge on to the kids, which is something he really enjoys.

Ron shoots a Kolar and uses Federal ammunition. He considers himself self-taught. The shooters he has looked up to in the sport include fellow Californian Dan Bonillas, who he called a local hero, and Ray Stafford. His biggest influence has been his wife Susan, who he says kept pushing him and telling him to go out and have fun.

His advice to other shooters is not to turn shooting into work and just have fun and enjoy the sport and especially the people in it. He stressed the importance of having a professional ﬁt your gun.

Alcoriza owns an auto repair business, working on BMWs, Mercedes and Rolls Royces. He has a son Dave and daughters Laura and Cristina. Dave participated in the 1996 Olympics in trapshooting, competing on the Army team for eight years. Ron said there’s not much time for other hobbies besides shooting, but he also enjoys hunting and ﬁshing occasionally.

The one word he said best describes him? “Grateful.”